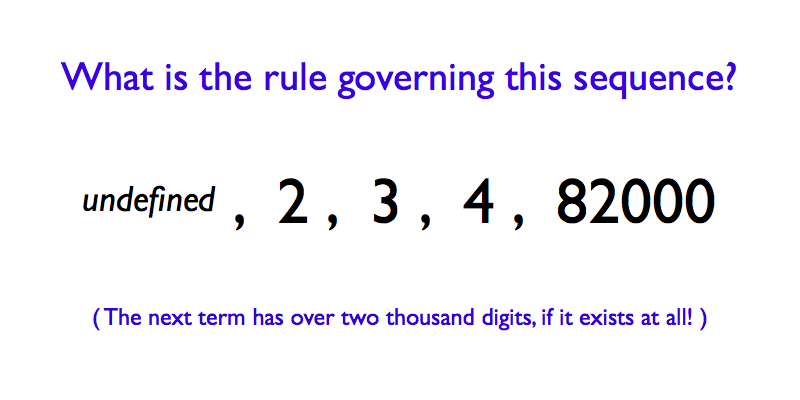 In this sequence, the nth term is the smallest positive integer (other than 1) that can be expressed in all bases from 2 to n using only the digits “1” and “0”.

This sequence struck me as particularly intriguing. It seems to be plodding along in a fairly pedestrian fashion: 2, 3, 4, … before suddenly jumping four orders of magnitude to 82000, a number that feels particularly jarring because it is almost obstinately unremarkable. 82000 is not a number that turns up in a lot of different contexts; as a rule, it keeps quite a low profile, and yet here it is popping up in our sequence, seemingly out of nowhere.

Moving forward, 82000 is big, but it is not so big as to make you lose hope that finding another term might also be manageable. How many digits might the sixth term (the first number that is expressible with only “0” and “1” in bases 2, 3, 4, 5 and 6) have? Ten? Twenty? More than that?

To find the fifth term, I had written a program in Python. Essentially, it worked by going through all the positive integers in binary, treating their digits as those of a base six number, then expressing that number in bases 3 through to 5 to check whether these other expressions contain only “1” and “0”. Probably not the most efficient way of doing things, but given that it had worked well enough so far (finding 82000 in under a second), I was hoping to find the next term in relatively short order.

I probably should not have bothered looking at all. Although this sequence is not in the rather fabulous On-line Encyclopedia of Integer Sequences [UPDATE: It is now.] the sequence of “Numbers that can be written from base 2 to base 5 using only the digits 0 and 1” (Sequence A146025) is. This sequence reads “0, 1, 82000″… and that is that. With three terms, the sequence is “conjectured to be complete” and has apparently been checked to 3125 base 5 digits (i.e. to roughly 102184, which somewhat puts my 1021 in the shade).

I do not have a proof as to whether or not there are any more terms in the sequence. However, I do have the following loose argument, which I feel is at least suggestive that we may already have found all there is to find.

Let’s take an extremely naive view and suppose that the digits of any d-digit positive integer n, expressed in base b, can be considered to be randomly and independently selected from the b possible digits used in that base (with the exception of the first digit, which is additionally constrained not to be zero). In this case, the probability that n is written only with 1s and 0s in base b would be equal to:

The relationship between n and d, the number of digits of n in base b, is:

So, if we further assume that the digits of n in different bases can be considered to be independent (I will come back to these dodgy assumptions!), then the probability p(n,b) that n is written only with “1” and “0” in all bases from 2 to b would be equal to:

The expected number e(b) of positive integers (greater than 1) that can be expressed in all bases from 2 to b using only the digits “1” and “0”, could then be found by adding up these probabilities, from 2 to infinity:

Now, I do not want to go into all the tedious manipulations, but it turns out that with a bit of messing around, you can show that this expectation is bounded above and below in the following way:

Now, the key question is whether the infinite sum in those bounds on e(b) converges or not, for each value of b. If it does converge, then (given our very shaky set of assumptions) we would expect there to be a finite number of integers (possibly none at all) that could be expressed with only “1” and “0” in bases 2 through to b. If it does not converge, then we would expect there to be an infinite number of such integers.

Luckily, it is well known that those sums converge if and only if the exponent α(b) < −1. Hence we just need to check the value of α(b) for each integer:

[UPDATE: Hacker News commenter throwaway_yy2Di has created a nice graph of my upper and lower expectation bounds for values of b from b = 2 to b = 15.]

Clearly, there are significant issues with this argument. The digits of a particular number in a certain base are not chosen randomly, nor are they generally independent from one base to another. A number that ends in a “1” in base 6 will also end in a “1” in base 3, for example.

On the other hand, I do feel that there is something going on here. After all, 3, 4 and 5 are the only bases that are actually relevant to the argument given above and they have no common factors (unlike 3 and 6 in the example given above). If you pick a moderately large positive integer that is expressible using only “1” and “0” in base 5, wouldn’t you expect the base 3 and base 4 representations of that number to look as if their digits had been chosen randomly and independently?

Also, it is worth observing that our supposed probability p(n,5) that a given integer n will be expressible with only “1” and “0” in bases 2 through to 5 actually drops off quite quickly. Most of the expectation of finding solutions is concentrated around the lower integers (the bigger n gets, the more digits have to fall our way), so if you have got to 102184 and you still have not found a solution…

Anyway, that is the best I can do. I do not think there are any more terms in the sequence, but it is an open problem, so I would be delighted to see whether anyone else has any ideas on how this could be investigated. Comments are welcome, as always.

UPDATE: The 82000 sequence seems to have captured the imagination of quite a number of people. I have collected some links to related content HERE and HERE. I have also posted some ideas on related sequences HERE.

* Note that, while the “unary” system, in which positive integers are represented by a sequence of 1s (a tally system, essentially) is sometimes referred to as “base 1”, it is not a mathematically natural extension of what “base n” means for all other positive integers. Since I am interested in the mathematical properties of this sequence, it is important to use a mathematically consistent definition. Hence, the statement that “base 1” does not exist, since there is no true positional numbering system that uses only one distinct digit.

5 thoughts on “Solution: Covering all the bases”