Thanks to all those who had a go at this. It was great to see people enjoying wrestling with the logic of the puzzle. A variety of valiant yet unsuccessful attempts were proposed until one Twitter-user eventually came up with not one but two correct solutions.

Here is a good early proposal from @GHSMaths: 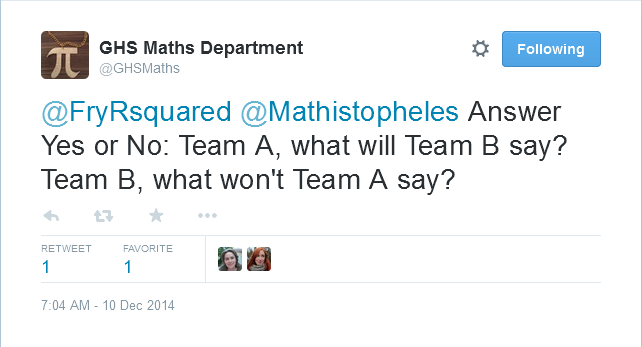 This suggestion would be a correct answer, were it not for the fact that I specified that the same question should be asked of both teams. Some people tried to get around this by linking the two questions into a single sentence, using a structure like “If you’re A then XXXXX, but if you’re B then YYYYY?” However, this is still two questions.

(Also, on a point of extreme pedantry, as someone pointed out, GHS Maths’ proposal might technically be described as a “Yes”/”No” question rather than a Yes/No question. Yes and No are not being used meaningfully here and could equally be replaced by Dog/Fish or whatever. This is one thing that I was trying to avoid by stating that Yes and No should be “grammatically sensible answers”, though I admit that this phrase does not really convey this successfully.)

In any case, the answer was on the right lines.

This solution from Troy R is also worthy of comment for the sheer amount of mental effort that it would demand of the poor teams. 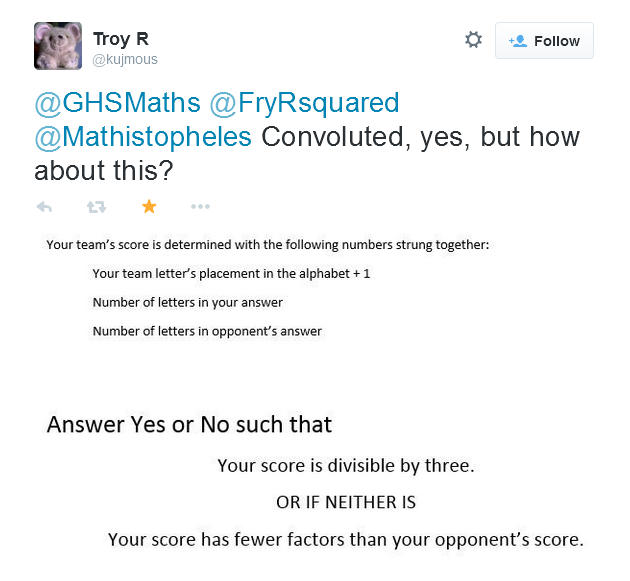 Unfortunately, it turns out that the logic of this idea doesn’t quite work out, because one player can force a win with their choice of answer. It also doesn’t really count as a question, but again, it was on the right lines in its simultaneous consideration of both team names and answers.

Although it is dressed up differently, the approach required for this puzzle is similar to that used in puzzles of the “One of them always lies, one of them always tells the truth” variety. Incidentally, for those who enjoy such puzzles, here is a fantastic book which takes you through every conceivable (and inconceivable) permutation.

To approach our problem, we first observe that who wins and who loses can clearly only depend on the answers that the teams give to the question that you ask them. Since it must be a Yes/No question, there are only four possible outcomes: YY, YN, NY, NN, and each of these must correspond to a win for A (and a loss for B) or a win for B (and a loss for A), since we require that the question will definitely separate the teams.

Next, suppose that the text of the question does not refer to the answer given by the opposing team. This is impossible, since, the scenarios YY and YN, which must be marked differently for A, could not then be distinguished.

Furthermore, suppose that the text of the question does not refer specifically to the names of (at least one of) the teams. This is also impossible, since, in this case, the teams would be indistinguishable and YN could not be marked incorrect for A, while NY was marked correct for B (or vice versa), as is required.

The question that I had in mind was:

‘If I had asked the question “Are you Team A?”, would the other team’s answer be marked as correct?’

Hearty congratulations to Mike Bench-Capon who came up with this exact question and even managed to fit it into a tweet:

In fact, Mike had already submitted a different correct answer, which exploited the lexical properties of the letters A and B and the words “Yes” and “No”:

Although this question has certain disadvantages in relation to the previous one, since it would not be elegantly generalisable to all possible pairs of team names (or to other languages), if you work the logic through, you will find that it is indeed a correct answer, and a pretty clever one at that.

4 thoughts on “Solution #2: The Ultimate Tiebreaker”