UPDATE: JAN 2016 – I am currently in the middle of some major rewrites on the script for this audio drama, so I have taken the track down for the foreseeable future.

A body. A police inspector. Three suspects gathered in the library.

Think you know where this is going…?

This was the most ambitious piece that was completed for the UCLU Radio Drama project (a student radio project). At over half an hour, it is more than three times the length of anything else that we recorded, with double the number of characters.

The biggest challenge was realising the busy 1908 flashback street scene, with reporters, an angry crowd, dialogue, passing traffic and so on. This was an interesting scene to put together, since it first required that I get some idea of what a London street in 1908 might actually have sounded like. Certainly very different from a street in 1928 (the play’s main time period), as I discovered, since these twenty years span the period over which motor vehicles replaced horses as the main means of road transport in the city.

By 1928, it seems that traffic noise had become a significant issue in London, as evidenced by these fascinating recordings from the period. However, since I didn’t fancy tracking down creative commons audio of authentic 1920s vehicles, I decided to make my life easier by setting the single 1920s exterior scene on a traffic-free side street.

These two photos give a good indication of how much London traffic changed over the first quarter of the twentieth century: 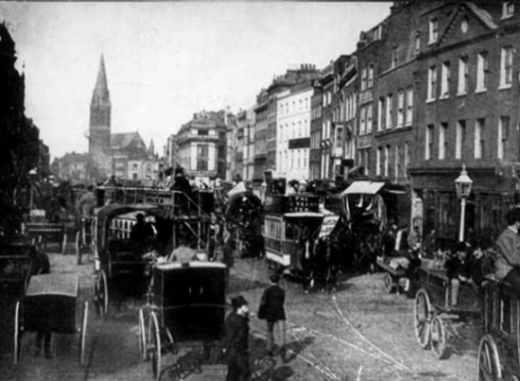 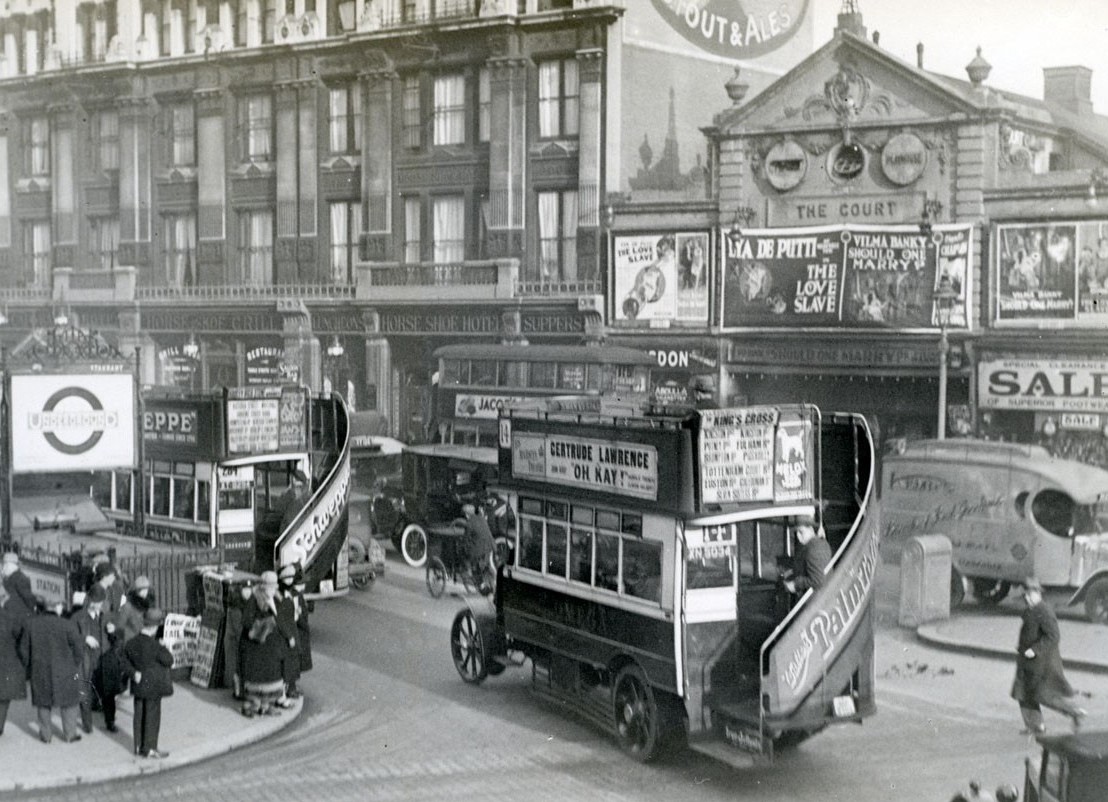 While I was fairly happy with how the piece turned out, given the time constraints on the production, I do intend to go back to the script at some point, because I think there is probably more that could be done with it. I would like to change the structure of the earlier parts to add a bit more variety to the narrative, perhaps introduce a sidekick for Inspector Gunn with an initial scene between them before the suspects arrive, and to think more broadly about what other changes would be needed to get the length up to a more satisfying forty-five minutes.

Included below is a short accompanying text, written to form part of a competition entry, which gives some further background to the piece.

The Final Act started out as a conversation with a friend several years ago about whether anything new could be done with the murder mystery genre or whether every plausible combination of victim, crime and culprit had already been exhausted.

We both loved the works of Agatha Christie (Who doesn’t?) and tried our best to come up with a scenario that she and other writers had not yet explored. Whether we succeeded or not, I don’t know – there is so much crime fiction about – but we did end up with the seed of an idea that seemed to have some potential.

Nothing came of this until several years later, when I started working with a group of writers who were interested in recording audio plays. I had always thought that one day I might come back to this murder mystery idea, and it seemed like the right time to have a go at it.

Since we had no experience in audio, the aim of the group was initially to write short plays of under ten minutes in length, so that they would be easy to produce. In order to fulfil this brief, I had the idea of stripping the story back to just the final scene, where the detective gathers the suspects together and reveals their darkest secrets before providing the solution to the mystery. Although the play eventually grew to be about three times longer than was originally planned, this structure was retained, since it seemed a nice way to tell the story.

I had actually envisaged that the play would be set in the present day, with a rich businessman meeting his demise in a high tech office in Canary Wharf. However, I soon realised that modern technology makes telling a murder mystery significantly more difficult. It’s much easier to keep people in the dark about what’s going on when they don’t have mobile phones! Also the historical setting seemed to fit in well with the Christie-ish tone of the script.

At first, I found the idea of researching the nineteen-twenties quite intimidating, but in fact this became one of my favourite aspects of the writing process (not to mention a guilt free way to procrastinate). Not everything I found out went into the play, but I have learnt some odd bits of trivia on the history of bridges over the Thames, when women were first allowed to take degrees at Oxford and what the streets of London might have sounded like in 1928 (a lot noisier than they are in the play!).

Thanks to all the actors and others who contributed to this production. It wouldn’t have been possible without them. Thanks also to Great Ormond Street for kindly allowing me to use a piece of music from the period, and to the friend with whom the original idea was developed.