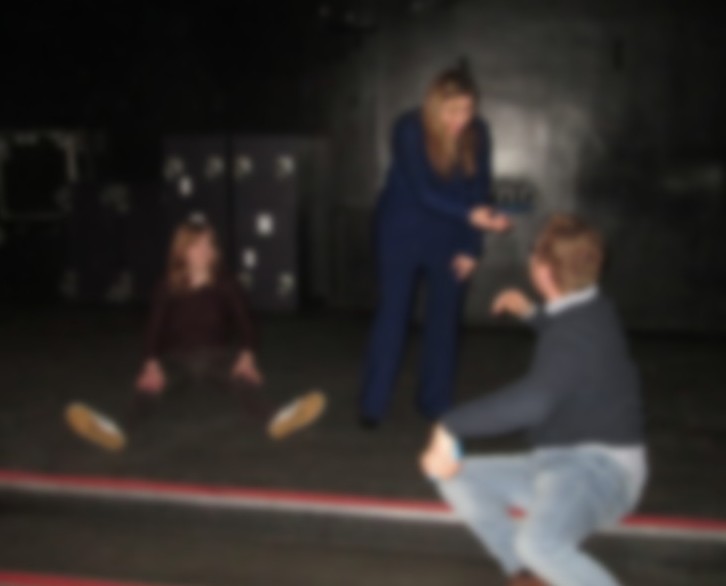 A devised scene from the second audition

Auditions for An Everyday Apocalypse took place over the last couple of weeks. We held two sessions, the first a relaxed Valentine’s afternoon upstairs in one of the pubs that will host the Page to Stage Festival itself; the second a moodier evening session in the back room of a bar.

One pleasant surprise for me was finding out how many venues like these are prepared to offer their space to theatre groups for free (at least in Liverpool), for the purposes of rehearsals or auditions. I suppose this attitude makes sense, in that the space would otherwise be unused and the venues get to sell a few more drinks or even to facilitate a more profitable run of performances down the line, but I still find it a pretty generous policy. It clearly pays to get on (and stay on) the good side of all your local landlords.

Since Zara Brown is our director, and therefore the expert in these things, I left her to plan the structure of the auditions. As an outsider to such events myself (mostly), what she came up with was quite fascinating and indeed really rather good fun. The atmosphere was certainly a good deal lighter than the auditions that I had previously observed (and later replicated) in student contexts (which had basically consisted of getting actors to perform rapidly prepared monologues), with the result, I think, that everyone was more relaxed and generally in a better mood than I had been used to.

The sessions comprised some short icebreaker exercises followed by an improvisation game, in which the actors created rapid-fire scenes in pairs. We then gave them fifteen minutes in small groups to devise a longer scene based on some randomised prompts (a location, a prop and a last line), before moving on to performances of extracts from the actual script. 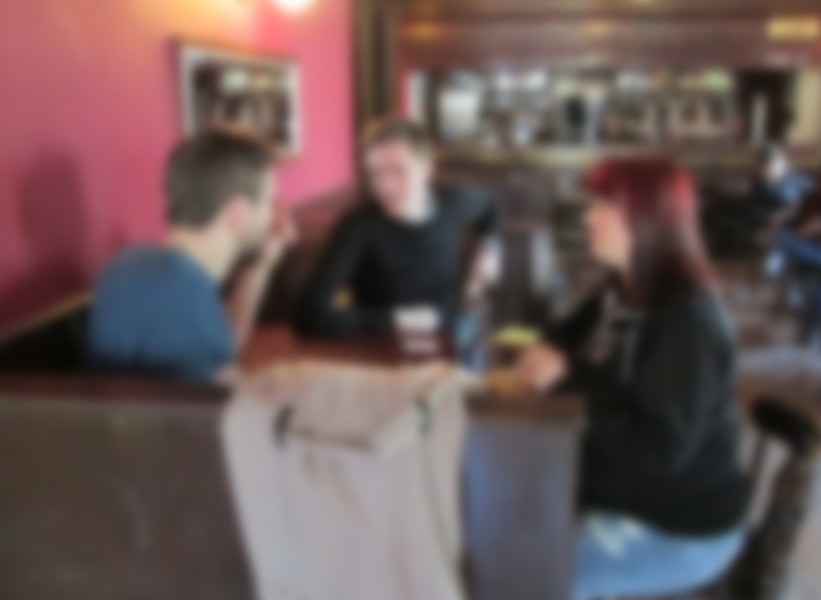 Planning a devised scene at the first audition

The highlight for me was probably the improvisation game, which elicited some hilarious flights of fantasy and which looked like so much fun that I really wanted to have a go myself!* The devised scene task was also very interesting, not just in terms of the outcome, but also in seeing how the various groups approached the planning phase in very different ways, some spending almost all of their preparation time talking through their idea, while others preferred to repeatedly improvise and revise their scene, refining what was working and discarding what wasn’t as they went along.

Of course, the most important thing was that the combination of activities allowed us to get a good idea for the individual styles of the actors, giving us a chance to see them working in a number of tones and contexts, and I think this allowed us to make a fair decision on how to cast the play. Overall, we had more male auditionees than female (which was a surprise, given that the ratio at the casting day had been the other way round), but since we had two male roles to cast and only one female role, this worked out quite well, and the ratio of applicants to parts was about six to one for each gender.

Naturally, it would not be appropriate to go into detail on how we made our final choice. Suffice to say that we saw some very good actors who, for one reason or another, we thought did not quite fit our script, and we saw a number of others who put themselves very firmly in contention for a role. Ultimately though, despite the high standard and the fine margins on which we had to judge, Zara and I were unanimous in our decision and we are now really looking forward to working with the cast that we have assembled.**

So, to cut a long story short***, we are now in a position to announce our cast…

[UPDATE 14/03/2016: Unfortunately, we have had to make some casting changes
since the publication of this post. The link below reflects these changes.]

Click HERE to see the cast of An Everyday Apocalypse

* Actually, I did have a go in the second audition, for purely demonstrative purposes… but, predictably, I wasn’t very good at it.

** They all said yes, thankfully!

*** Or, indeed, not to, since I am conscious that I have already been going for over six-hundred words by this point.

Thanks to The Pilgrim and Bumper for providing us with our audition space.