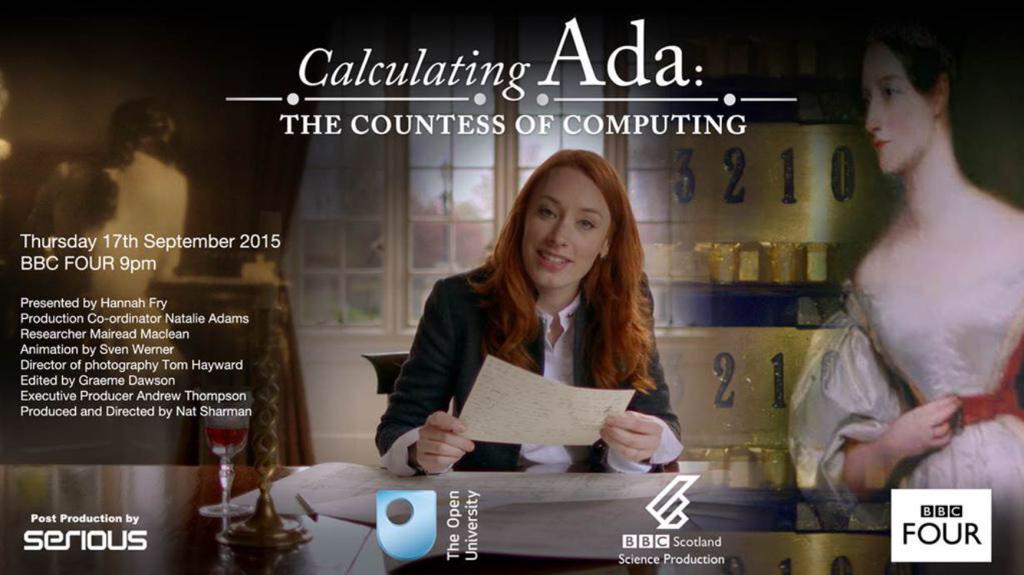 A quick mention for this fantastic documentary on the mathematician and computing pioneer, Ada Lovelace, from my colleague, Dr Hannah Fry. I only got around to watching it properly yesterday (poor form, since it was broadcast several weeks ago), but it is – as I had predicted – pretty fantastic. A straightforward telling of Ada’s fascinating story, high on emotional reality and low on unnecessary artifice, brought to life by a beautiful musical score.

There’s something in there for writers too, since Ada Lovelace was the daughter of Lord Byron, an artistic inheritance that seems to have had a number of conflicting influences on her life and work.

It is still available online for eight days (UK only, sadly), so do book yourself an hour over the next week to watch it. You won’t be disappointed. [UPDATE: It is actually still available on the BBC Youtube channel HERE.]

PS. When you have seen the documentary (or if you are too late), it is also worth checking out this article from Hannah on the BBC website, which puts an interesting and subtly different spin on the story.

PPS. At one point, bringyourownsun and I were nearly in this documentary, sitting in rapt attention as Hannah delivered a lecture on something or other, presumably for some sort of “This is who I am” montage to introduce her at the start. Ended up on the cutting room floor though, for which I am quite grateful, to be honest. We certainly wouldn’t have improved it!