What would be your estimate of the combined volume of these boxes, in cubic metres, to the nearest 0.1? There are nineteen in total (including the flat one that you can see perched on top), of various sizes, pushed together fairly closely, though not tightly. The chair is included in the photo to give an idea of the scale. 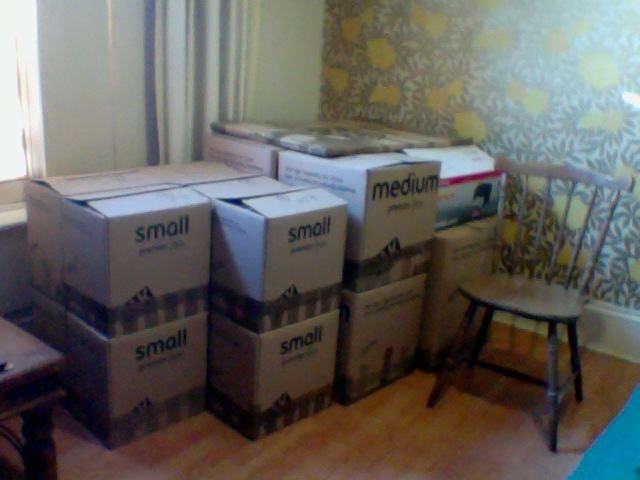 Last night, I had to measure and weigh each of these boxes in order to get accurate quotes on how much it would cost to get them delivered overseas. I thought that perhaps it would be helpful to give the total combined volume of the boxes, as well as the separate volumes, so I duly added everything up and came up with an answer. I then checked that answer a couple of times because I had trouble believing it.

I should say that the boxes appear much larger to me in real life than they do in the photo. In the photo, I would guess perhaps 1.7 or 1.8 cubic metres. In the (cardboard) flesh, I would probably say something more like 2.2 or 2.3. Valued contributor Troy R‘s estimate (working from the photo) is similar, so I am guessing – from this very limited sample – that my estimates are not wildly out of step with what other people might think:

.
The true combined volume of all the boxes is approximately 0.89 cubic metres. Not even 1. In fact, not even particularly close to 1, and roughly half of what I would estimate from the photo.

I really struggled to believe this. Surely those over there are roughly equal to a cubic metre, and then there are these ones over here too! I even had the benefit of walking round them and looking from several angles, but as I mentioned above, in reality I find it even harder to convince myself of the true figure than I do in the photo.

Here are the measurements*:

Add all that up, then convert from cubic centimetres to cubic metres by dividing by one million, and you get the answer. 0.89 or so.

Do other people find this odd too, or is it just me (and possibly Troy)?

If so, I suppose the moral of the story is that a cubic metre is big. Bigger than my spatial perception feels it should be… And perhaps this illustrates a more general issue, that when I look at a three-dimensional object and make a rough judgement about its volume, I am unconsciously allowing myself to be too strongly influenced by linear perceptions, rather than three-dimensional ones. A small deficit in an estimated side-length can become a very significant deficit in volume if it is replicated in all three dimensions and thus cubed.

Or is it just that I am rubbish at estimating volumes?

* The first three sets of measurements here are provided by the box manufacturers, hence the bizarre degree of accuracy. The other two are my own measurements.

2 thoughts on “How big is a cubic metre?”