This rather elegant fact has been going round on Twitter:

r
However, there are other examples of this phenomenon…

@pickover @Derektionary This has not been unknown to the dabbler in such matters. The number 3 and 3/8 behaves in a parallel fashion.

In fact, pleasingly, we can construct an infinite number of facts like this.

Let’s say that we want to find positive integers A, B and C, such that:

We can also suppose that B < C (otherwise our mixed fraction would be a little odd) and that the highest common factor of B and C is 1, so that the fraction B/C is in its lowest form.

To find a relationship between A, B and C, we can square [1] and rearrange the equation to get the A terms on one side:

We can use double implications (⇔) here since we know that everything is positive.

Now, [2] tells us that two fractions with positive integer numerator and denominator are equal. Both fractions are in their lowest form (B/C because we said so earlier, while A and (A²–––1) clearly have a highest common factor of 1). Therefore the numerators and denominators are equal:

This means that there is an infinite family of solutions of the form:

Any integer greater than 1 will do as a value for A, so we have: 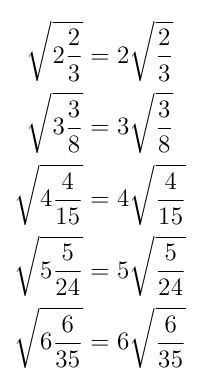